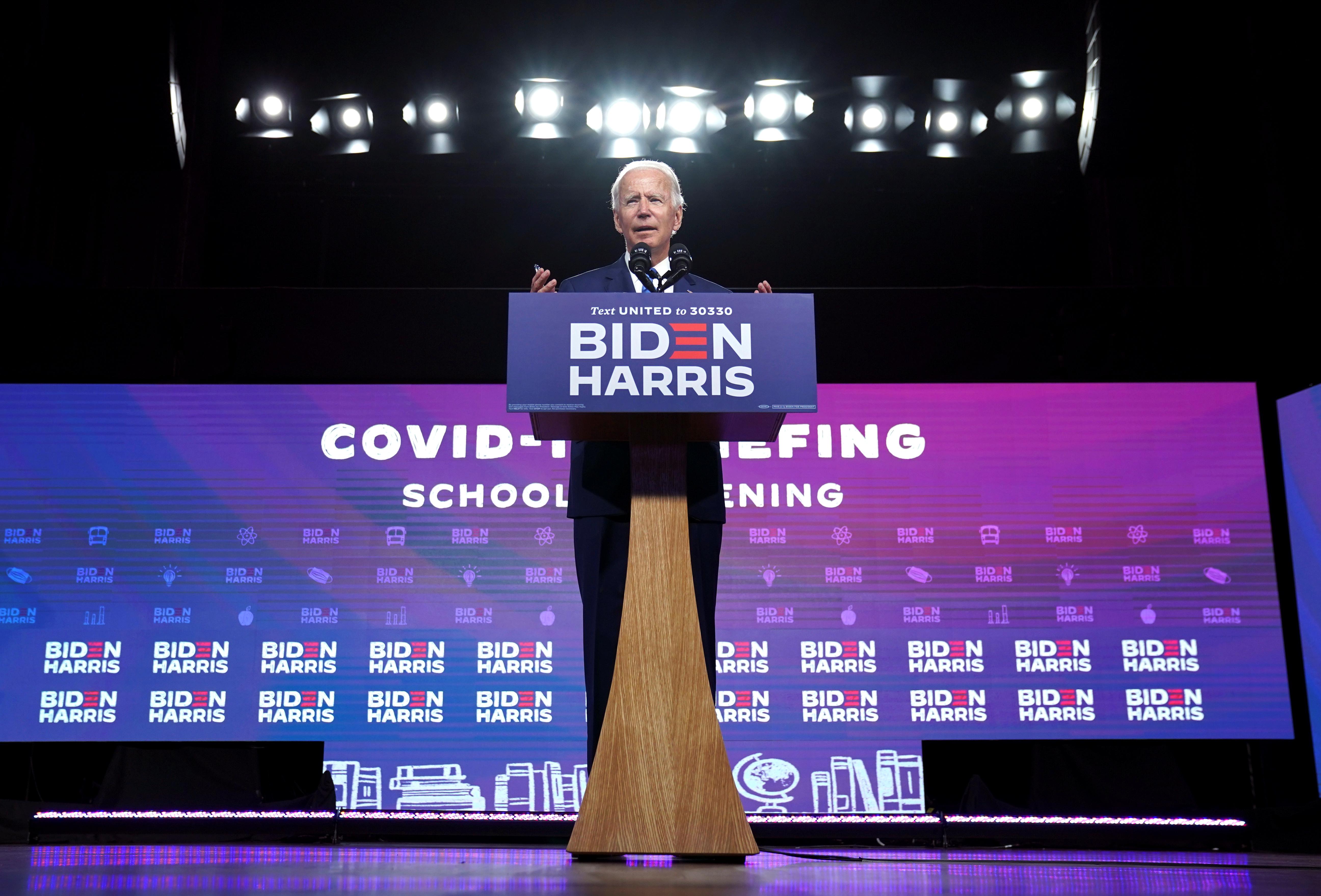 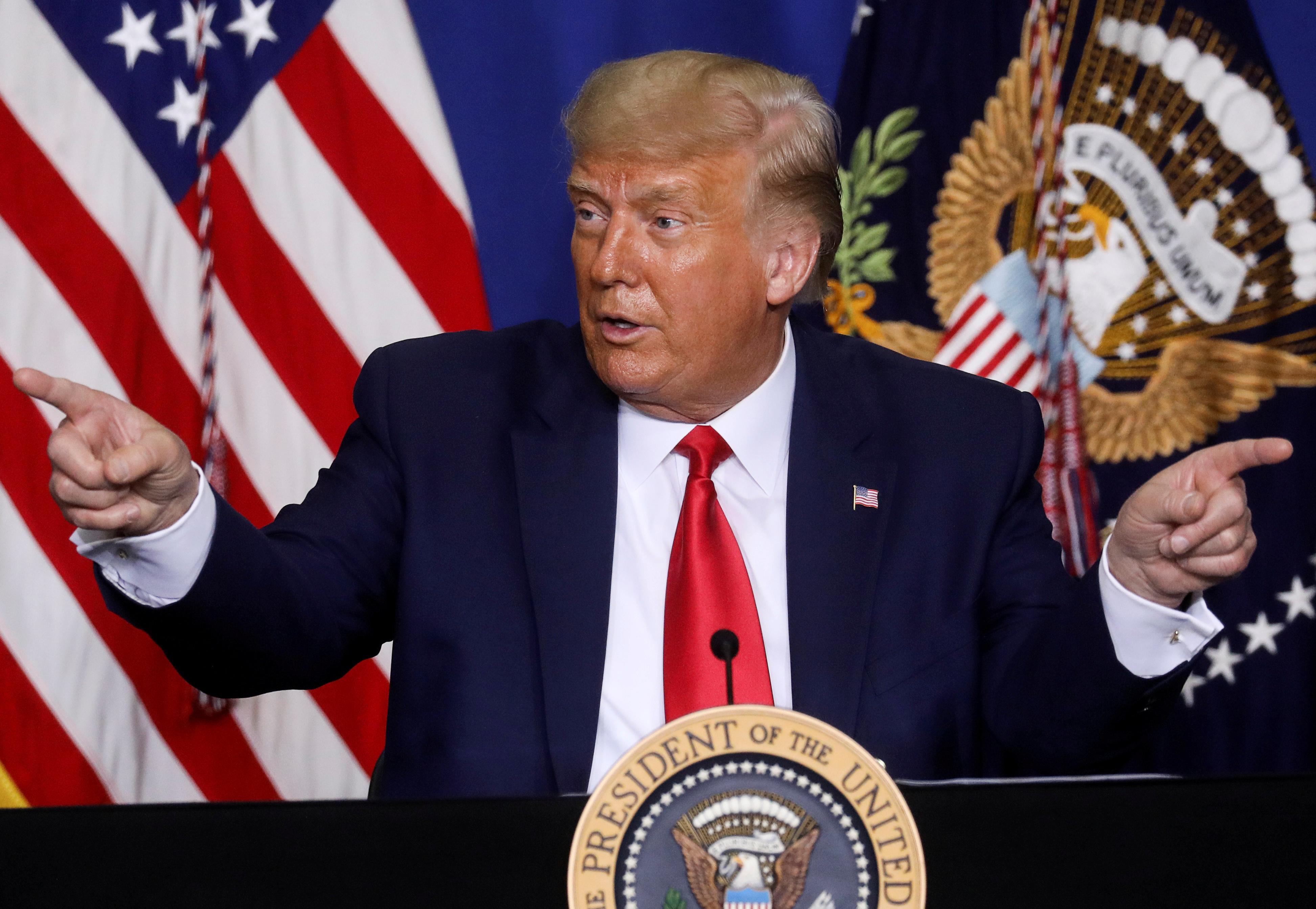 U.S. President Donald Trump speaks during a roundtable on "Wisconsin Community Safety"after he surveyed property damage while visiting Kenosha in the aftermath of recent protests against police brutality and racial injustice and the ensuing violence after the shooting of Jacob Blake by a police officer in Kenosha, Wisconsin, U.S., September 1, 2020. Leah Millis

Democratic nominee Joe Biden looked to shift the focus of the U.S. presidential race back to the coronavirus and President Donald Trump’s handling of the pandemic during a Wednesday campaign event on safely reopening the country’s schools.

The health crisis, in which more than 184,000 Americans have died, has been overshadowed in recent days by civil unrest in Portland, Oregon, and Kenosha, Wisconsin, where a white policeman shot Jacob Blake, a Black man, in the back last week, triggering protests.

Biden's event was part of his campaign's effort to make the Nov. 3 election in part a referendum on the Trump administration's response to the outbreak and came as millions of students are starting a new school year either virtually or under restrictive conditions.

"If President Trump and his administration had done their jobs early on in this crisis, American schools would be open. And they’d be open safely," Biden said after receiving a briefing from health experts in Wilmington, Delaware.

Biden and his Republican opponent have offered dueling arguments over which candidate can keep the country safe.

Each has accused the other of fostering the sometimes violent protests over racial injustice and police brutality that have rocked the nation for months after the May 25 death of George Floyd, a Black man, in Minneapolis police custody.

Trump, who visited Kenosha on Tuesday, has sought to leverage the volatile climate surrounding the protests to his political benefit, casting himself as a "law-and-order" president holding the line against chaos.

A new Reuters/Ipsos poll shows his approach has yet to boost his national standing. The poll released on Wednesday showed that most Americans do not see crime as a major problem confronting the nation and a majority remain sympathetic to anti-racism protests.

By contrast, 78% of Americans said they remain "very" or "somewhat" concerned about the pandemic. The poll showed that 47% of registered voters support Biden compared with 40% who said they will vote for Trump.

Biden plans to travel to Kenosha on Thursday, where he will hold a community meeting, his campaign said.

Trump on Wednesday flew to North Carolina, a state which, like Wisconsin, is an election battleground. In remarks to supporters in Wilmington upon landing, he argued that the country was "rounding the turn" concerning the pandemic and stuck to his law-and-order theme.

Speaking later to a group of veterans while commemorating the end of World War Two on Sept. 2, 1945, Trump said, "American warriors did not defeat fascism and oppression overseas, only to watch our freedoms be trampled by violent mobs here at home."

While the event ostensibly was part of the president's official business and not campaign-related, Trump used the occasion to take several shots at Biden.

Reopening schools amid the pandemic has been a top priority for Trump, who has argued it was necessary to boost the economy and give relief to working parents. His campaign on Wednesday criticized Biden for being overly cautious on the matter.

"(Biden) always casts things as an either-or situation. Either we can open up or we can be safe," Trump spokesman Tim Murtaugh said. "The president disagrees with that. It can be both. For the economy and schools, we can both be open and be safe.”

At his event, Biden called on Trump to bring congressional leaders together to negotiate a new aid package to assist state and local governments, which have struggled to provide services for students amid an economic downturn due to coronavirus lockdowns. Congress has been in an impasse over another round of virus-related funding.

"Get off Twitter and start talking to congressional leaders of both parties," Biden said.

Earlier in the day, Biden's team announced that his campaign and the Democratic National Committee had raised $364.5 million in August, shattering the record for the most money raised in a single month during a presidential campaign. The Trump campaign has yet to release its figures for the month.