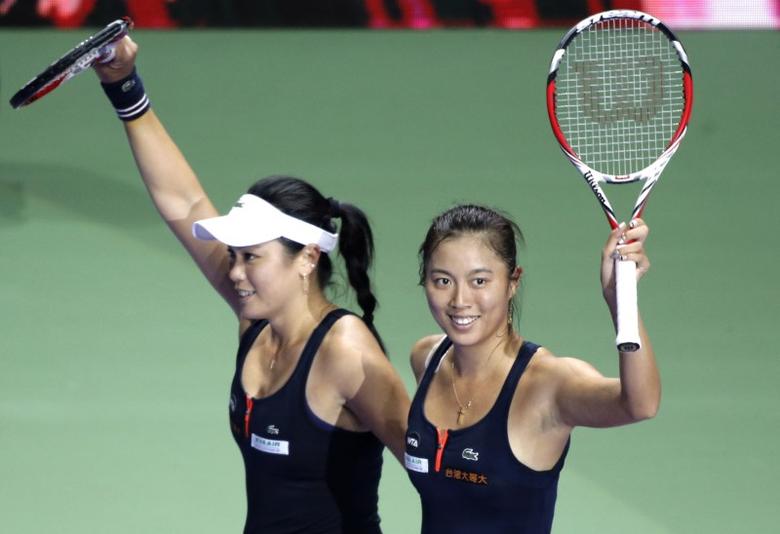 Taiwan's tennis playing sisters Chan Yung-jan and Chan Hao-ching are in quarter-final action in the women's doubles at Wimbledon on Wednesday having found success with new partners.

The sisters won a number of doubles titles together before going their separate ways at the start of the year.

The elder sibling, Yung-jan, teamed up with former women's singles champion and world number one Martina Hingis in February after the Swiss split from American Coco Vandeweghe after a short spell together.

The move reaped instant rewards as the pair won titles in Mallorca, Rome, Madrid and Indian Wells and played their first grand slam together at the French Open this year, reaching the semi-finals.

They have continued their good form into Wimbledon where as third seeds they have beaten their three previous opponents without dropping a set and face Germany's Anna-Lena Groenefeld and Czech Kveta Peschke for a place in the last four.

It has not been so easy for Hao-ching and partner Monica Niculescu from Romania.

The ninth seeds have had a tougher route to the quarters, having been taken to three sets in two of their encounters, and next face Catherine Bellis from the United States and Czech Marketa Vondrousova.

Both sisters are hunting their first grand slam title, having previously gone close. The 27-year-old Yung-jan was twice runner-up at the Australian Open in the women's doubles, while Hao-ching, four years her junior, reached the mixed final at Wimbledon three years ago.