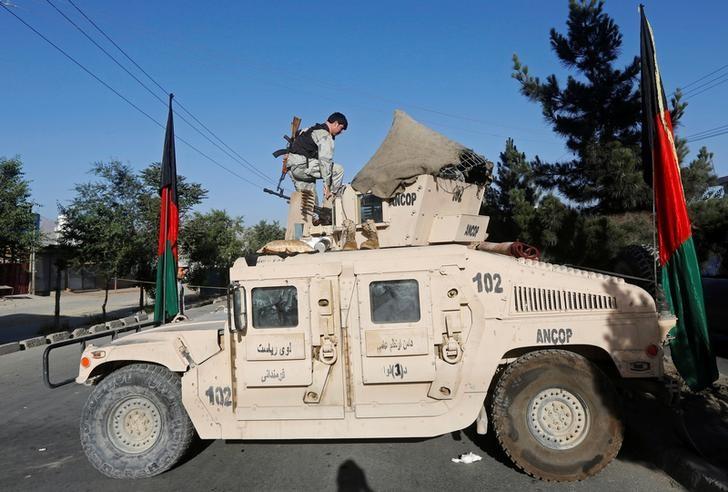 Given wide-ranging authority by the Trump White House to determine its own course of action, the Pentagon is now considering troop levels in Afghanistan. But as the U.S. administration decides on a military strategy, the last 16 years have shown that Washington cannot rely solely on its troops to secure the Afghan state or stop groups like the Taliban from using the country as a base for attacks against the West. The U.S. must pursue political solutions as well.

For Washington, that task includes looking beyond buttressing the Kabul regime to engaging with major regional powers, namely Pakistan, China, and India. A fresh approach to Islamabad is particularly important. Trump must increase the pressure Washington is putting on Pakistan to contain the expansion of the sanctuary it provides for extremists like the Haqqanis - today one of the most influential Islamist militant organizations in South Asia.  Haqqani, a Taliban-allied militant group established in the 1970s during the Afghan war against the Soviets, maintains close ties with al Qaeda. The network rose to power in large part through the backing of Pakistan, a nuclear state, which supports Islamist militants in Afghanistan in order to create a power vacuum that Pakistan itself could fill by proxy.

Haqqani’s increasing military and political operations in cities across southeastern, northern, and western Afghanistan, especially in the capital Kabul, have enabled its Taliban affiliates to control or contest territory that is home to about a third of the Afghan population, nearly 10 million people. According to national security expert Peter Bergen, this figure is greater than the population controlled by Islamic State in Syria and Iraq at the group’s peak in 2014. For al Qaeda and its affiliates in Afghanistan, it represents a base from which militants can recruit, train, and plot attacks against the West, including, principally, the United States.

Pakistan’s interference in Afghanistan is hardly new. For decades it has tried to ensure that whatever regime rises to power in Kabul aligns with Islamabad's interests. Since the U.S.-led engagement in Afghanistan after the 9/11 attacks, Pakistan has quietly reestablished militant proxies to both hasten the departure of Western forces and influence post-NATO Afghanistan. The Trump administration’s announcement that it is considering expanding U.S. military involvement in the region, however, changes Pakistan's calculus.

The current Afghan unity government was formed in Kabul in 2014 after a disputed election required Washington to mediate a power-sharing agreement between political rivals. Today, President Ashraf Ghani continues to face unresolved ethnic tensions, causing deep unease in the country’s diverse communities, who see their selves being increasingly marginalized. This political crisis threatens the fledgling Afghan army and police forces, where many believe the Ghani administration has put ethnic interests ahead of national ones. In such cases, disaffected Afghan security leaders are increasingly co-opted by the Taliban. If this infiltration is not stanched, the U.S. and Afghan security forces may face increased risk of insider attacks: Afghan soldiers who defect to the Taliban and turn on U.S. and Afghan troops.

From a strategic perspective, the co-option of the Afghan military and national police by Haqqani and the Taliban weakens the ability of Afghan forces to take over security from NATO and undermines Afghan opposition to al Qaeda and its allies. Such co-option becomes even more problematic when considering the remarkably high death rate of Afghan soldiers, which already hinders their ability to combat well-financed militant forces. In a report released in February, the Special Inspector General for Afghanistan Reconstruction found that nearly 7,000 Afghan soldiers and police had been killed in the first 10 months of 2016. Before NATO troops depart the region, the U.S.-led coalition must ensure that Afghanistan has a sufficiently trained and cohesive force to defeat the Islamist militants and their backers.

Although it has suffered a recent spate of deadly attacks, the Afghan capital has largely avoided the years of bloody upheaval that has affected the rest of the country. But the security of the Afghan state is far from assured - especially if Pakistan’s military and intelligence leaders continue to support proxies like Haqqani.

Another complicating factor in the current political crisis is the wider proxy war. Over the past few years, Russia and Iran have expanded their presence in Afghanistan in order to counter the Islamic State, while simultaneously increasing challenges to U.S. power and the Western-backed government in Afghanistan.

One potential worst-case scenario is the collapse of the central Afghan government. If that happens, U.S. and NATO troops could find themselves fighting a Taliban-dominated territory stretching across Afghanistan to the border of Iran. To create a more effective U.S. policy, Washington must deal with the Ghani administration’s political crisis. Unwilling to unite ethnic factions, the Afghan state remains paralyzed to the point that most observers believe it would collapse without indefinite U.S. backing. The Trump administration must therefore appoint an envoy to enforce the existing legitimate power-sharing arrangements between the Kabul regime and diverse ethnicities, which would help secure and stabilize the country and the region at large.

At the same time, the U.S. must work with the next-generation leaders of the Afghan army and national police to address infiltration of the Afghan security forces by Taliban-Haqqani factions. The anticipated additional U.S. troops will strengthen NATO’s combat support role to train and mentor the Afghan forces and help them aggressively counter the militants’ hold on territory in Afghanistan. But countering their infiltration will entail a restructuring of regional strategy, as the U.S. will have to work closely with the Ghani administration to execute political and security reform while confronting Pakistan’s support for Islamist extremists.

To that end, Washington should expose Pakistan's duplicity publicly where it supports U.S.-designated terror organizations like Haqqani, and begin sanctioning Pakistani military and intelligence leaders who support proxies. Although such measures would be drastic against an ostensible ally (and would require judicious application to protect sources and methods), previous approaches to address Pakistan's sanctuary for militants have failed.

Equally important, the White House must adopt a different approach to the larger proxy war and hold major powers accountable for their support of violent extremists that threaten regional stability. Washington should strengthen its alignment with India, and co-operate with China on regional concerns of mutual interest, in particular growing terrorism and economic security. Bolstered relationships with the major world powers, in particular with Saudi Arabia, which has good relations with Pakistan, could help contain its expanding sanctuary for extremists and more effectively forge a diplomatic solution between Kabul, Islamabad, and its Taliban-Haqqani proxies. That political solution, in turn, could de-escalate the Afghan conflict and help stabilize the South Asia region.

About the Author Rahmatullah Nabil served as the head of Afghanistan’s national directorate of security from 2010-12 and 2013-15. Melissa Skorka served as a strategic adviser to the commander of International Security Assistance Force in Afghanistan from 2011-14 and is a research associate at Oxford’s Changing Character of War Centre. @rahmatullahN