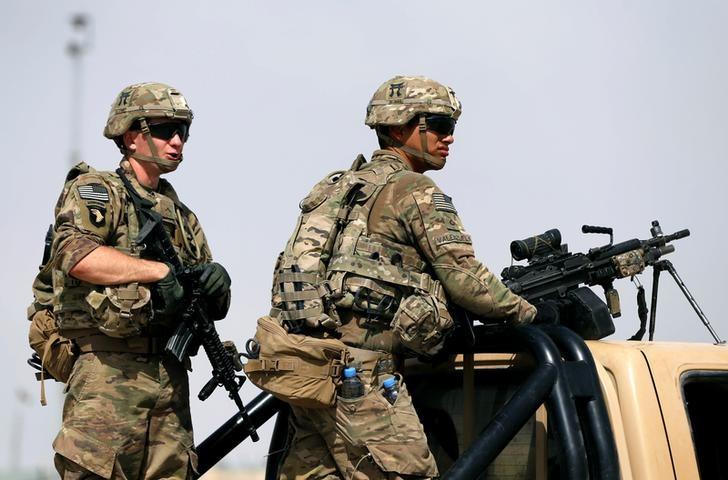 U.S. troops outside their base in Uruzgan province, Afghanistan July 7, 2017. Omar Sobhani

The trio known in foreign policy circles as “the adults” of the Trump administration wants the president to send more American soldiers into Afghanistan. Defense Secretary James Mattis, National Security Adviser H.R. McMaster, and Secretary of State Rex Tillerson are advocating for yet another troop increase less than three years after the U.S. officially transferred all security responsibility to the Afghans. But it’s Steve Bannon, the White House’s controversial chief political strategist, whom President Trump should listen to before dispatching his advisers to brief Congress on the strategy in mid-July.

As commander-in-chief Trump has granted the U.S. military tremendous latitude to resource operations as it sees fit. So Trump may not be inclined to overrule the Pentagon's recommendation for 3,000 to 5,000 more American trainers and advisers to support the 8,500 troops. It seems clear, though, that the administration is divided over the decision - and Steve Bannon is the most influential adviser in the White House urging Trump to think twice before deploying those forces. In fact, Bannon may be the only aide among the non-interventionist camp in the White House, which also includes senior policy adviser Stephen Miller, who has sufficient access to the president to persuade him to carefully review the military’s request before approving it.

In this case, Bannon, who was removed from the National Security Council in April, is right. One doesn't have to agree with Bannon's world view or nationalist ideology to recognize his logical and pragmatic perception of the war in Afghanistan.

After more than 15 years of combat, the spending of hundreds of billions of dollars of taxpayer money, and the ultimate sacrifice of nearly 2,400 U.S. troops, it's tragic that more officials in Washington can't see the war as it is: a chaotic environment full of false hopes, unrealistic promises, and an American inability to come to grips with the impossibility of creating a safe, democratic, and prosperous nation in a country where corruption, violence and patronage determine who wins and who loses.

America's military intervention in Afghanistan was the quintessential example of a war launched on solid moral and strategic grounds. The Taliban regime, after all, harbored al Qaeda, the group behind the 9/11 attacks on New York and Washington. Rooting out al Qaeda from Afghanistan, killing its top leadership, cutting off its financing and ousting the Taliban were all objectives that U.S. liberals and conservatives alike could agree on.

But after the invasion, the U.S. objective switched from destroying al Qaeda in Afghanistan to developing a new government in Kabul from the ground. Because Afghanistan had not possessed a national army or police force since the Soviet-backed government collapsed in the early 1990’s, the U.S. was also put into the position of starting one from scratch. Uprooting al Qaeda’s terrorist infrastructure and supply lines in Afghanistan was diluted from the principal U.S. goal in the country to one of many. Perhaps it was hubris to think that the West could construct a democratic state in the middle of Central Asia, unshackled by corruption and strong enough to keep the militants and warlords at bay. Or perhaps Washington truly believed it could pacify a country that knew nothing but war since the late 1970s. Whatever the reason, Afghanistan translated virtually overnight into a laboratory where the establishment of a presidential system could be tested.

This context is important because the men and women of the U.S. Armed Forces have been fighting and dying in Afghanistan to this very day - with little sustainable, strategic success to show for it. It's a policy failure, not a military failure. And as the U.S. should have learned already through two troop surges - the first of which took place in 2007 and the second in 2010-2011 - a policy failure cannot be solved with a few more troops.

The latest quarterly report from the Special Inspector General for Afghanistan Reconstruction shows the war is nowhere close to being over. According to United Nations statistics, 2016 was the bloodiest on record for Afghan security forces and civilians alike. Over a third of the country's districts are either under the control or influence of the Taliban. It's difficult to say U.S. policy is going smoothly when General John Nicholson, the top U.S. commander in Afghanistan, calls the war a stalemate in public testimony to the U.S. Senate. It's even harder when so many “ghost” troops - non-existent soldiers listed by corrupt Afghan officials to obtain additional U.S. taxpayer funding - are on the Afghan army's payroll that Washington can't be certain where its money is going or whether the Afghan security forces are equipped to respond to a crisis.

None of this lies at the feet of the corporal or sergeant on the ground risking their lives. Rather, the blame lies squarely on the policymakers in the national security bureaucracy who still think that the Afghanistan mess can be sorted out if just a few thousand additional soldiers are deployed, or a bigger check is written, or a few more years are dedicated to the mission. The blame should be directed at the generals and officials who fail to ask why 5,000 more trainers, advisers, and special operators will be capable of doing what 140,000 soldiers in the field during the troop surge couldn't. Congress shares the blame for deferring to the generals without asking questions and for failing to understand that military power alone can’t quash an insurgency, especially when those insurgents can cross the border to find safe havens in neighboring Pakistan.

We don’t know yet if Trump will follow the advice of the Mattis trio or his political adviser. But the fact that the president didn’t announce his intentions at the May NATO summit in Belgium suggests that something may have made him think twice on troop deployment. Thanks perhaps to Steve Bannon, the president may be slower to repeat the mistakes of his predecessors - at least when it comes to Afghanistan.

(Daniel R. DePetris is a fellow at Defense Priorities. The opinions expressed here are his own. @DanDePetris.)