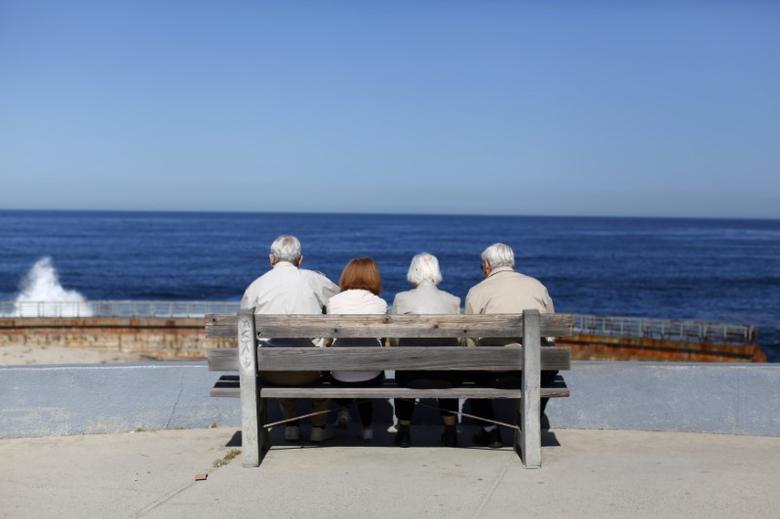 A pair of elderly couples view the ocean and waves along the beach in La Jolla, California March 8, 2012. Mike Blake

When Americans think about retirement planning, long-term care usually is a major blind spot - few of us want to contemplate the possibility of infirmity and dependency in old age. But we would do well to think about it now, as the Senate Republicans take a holiday weekend pause in their push to dismantle the Affordable Care Act.

Roughly half of Americans now turning 65 will require some level of long-term care during retirement. And when professional care is required, it usually is paid for by Medicaid, which covers 62 percent of long-term care in the United States, according to the Kaiser Family Foundation (KFF).

That may surprise people who think of Medicaid as a social safety net for the poor. Indeed, the program is a critical lifeline for 35 million children and 27 million adults in low-income households.

But nursing home care is expensive, and 62 percent of near-retirement households have saved less than one year of annual income for retirement, according to the National Institute on Retirement Security.

When savings run out, Medicaid steps in - nearly two-thirds of its spending in 2014 went to the elderly and disabled, according to KFF. “Medicaid has been a critical safety net for 50 years for people who have depleted their life savings,” said Jean Accius, vice president of the AARP Public Policy Institute. “It is insurance for your mother or your father or eventually for yourself, because the price can be so high.”

Yet the Senate bill would take our already-dysfunctional system of long-term care and make it worse - much worse.

The Better Care Reconciliation Act (BCRA) proposes to reduce expected Medicaid outlays by $772 billion over 10 years. That would destabilize access not only to nursing home care but home and community-based services - an innovative approach to care that saves money, and has grown quickly in recent years.

Proponents of BCRA argue this will not squeeze the states because the inflation adjustment will be tied to the federal measure of medical inflation (CPI-M). But as this Medicaid population ages into their 80s and 90s, their care needs will intensify and become much more expensive on a per-capita basis.

And after 2025, the inflation measure would shift to a more general inflation gauge that rises much more slowly than healthcare costs. Finally, per-enrollee caps will not adjust for unanticipated major new spending needs - for instance, a major new blockbuster drug or the need to deal with a public health emergency.

As federal funding falls behind, states would be left to raise taxes to meet the shortfalls, cut their budgets elsewhere or provide less Medicaid coverage. Cuts could be made first within home and community-based care, because these are optional programs under federal law, while nursing home coverage is mandatory. But nursing home coverage would suffer too, said Jessica Schubel, senior policy analyst at the Center on Budget and Policy Priorities.

"States may be forced to cut provider rates - which already aren’t very high,” she said. “The providers will then be forced to do more with less - they may cut staff, make fewer beds available to Medicaid patients, or close altogether."

Overall, the BCRA would increase the number of uninsured Americans by 22 million in 2026, according to the Congressional Budget Office (CBO). The increase in the number of uninsured would be disproportionately large among people aged 55-64 and with income less than 200 percent of the federal poverty line. Enrollment in Medicaid would fall by 15 million by 2026.

In the insurance exchanges, premiums for older people would soar to unaffordable levels, CBO found. For example, the net premium (after tax credits) for a 64-year-old with income of $56,800 would skyrocket from $6,800 to $20,500.

Taking away insurance will kill people - literally. A new study published in Annals of Medicine (bit.ly/2ua8ecp) documents how the lack of health insurance increases mortality; its math suggests that taking insurance away from 22 million people will result in 29,000 avoidable deaths annually.

At the same time, the tax cuts in BCRA would reduce federal revenue by $700 billion -  with 45 percent of that going to households making $875,000 or more, according to the Tax Policy Center. The bill repeals the Affordable Care Act’s 3.8 percent net investment income tax on dividends, interest and capital gains, and the 0.9 percent Medicare payroll tax surcharge.

The trade-offs in BCRA - insurance for tax cuts for the wealthy - are nothing short of appalling. Governor John Kasich of Ohio put it well while speaking out against the BCRA in Washington this week: “That’s good public policy? What, are you kidding me?”

(The opinions expressed here are those of the author, a columnist for Reuters.)