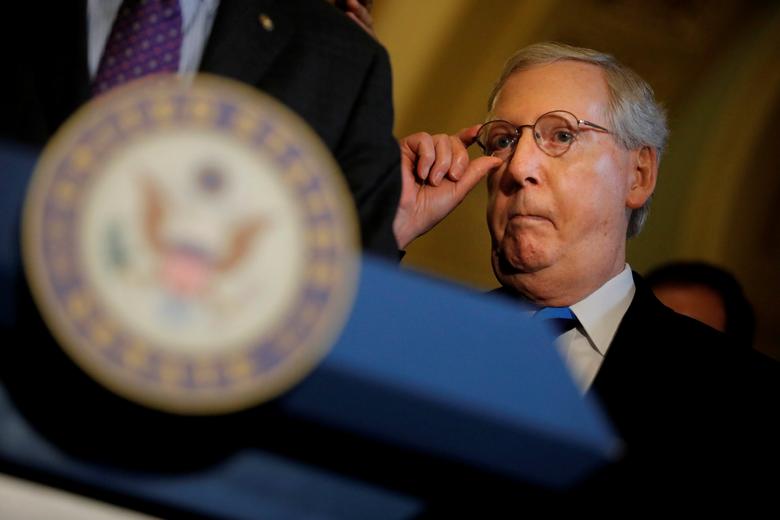 The top U.S. Senate Republican said on Tuesday he would unveil a revised version of major healthcare legislation sought by President Donald Trump on Thursday but deep divisions within the party left the stalled bill's prospects uncertain.

Majority Leader Mitch McConnell said the Senate would take steps to begin debate and hold a vote on the reformulated plan next week, but did not disclose any of the changes to legislation that some Republican moderates and hard-line conservatives have opposed.

McConnell also pushed back the Senate's planned August recess by two weeks to allow senators more time to tackle the measure that would repeal key parts of the Obamacare law as well as pursue other legislative priorities.

McConnell said the plan was to vote on the healthcare bill next week, and said he hoped to have a fresh analysis of the bill from the nonpartisan Congressional Budget Office at the start of the week.

"We're going to do healthcare next week," McConnell told reporters.

In addition to legislation to dismantle the 2010 Affordable Care Act, dubbed Obamacare, the postponement will allow more time to approve nominees to government posts and tend to other pressing matters, McConnell said in an earlier statement.

"Once the Senate completes its work on healthcare reform, we will turn to other important issues including the National Defense Authorization Act and the backlog of critical nominations that have been mindlessly stalled by Democrats," McConnell said in the statement.

The current version of the Senate Republican bill would phase out the Obamacare expansion of Medicaid health insurance for the poor and disabled, sharply cut federal Medicaid spending beginning in 2025, repeal most of Obamacare's taxes, end a penalty on Americans who do not obtain insurance and overhaul Obamacare's subsidies to help people buy insurance with tax credits.

The House of Representatives passed its own version in May.

Democrats call the Republican legislation a giveaway to the rich that would hurt millions of the most vulnerable Americans.

Since the start of 2017, when they took control of the White House, Republicans who also control Congress have been struggling over how to replace Obamacare.

For Trump, the healthcare overhaul marks his first major legislative initiative. Republican leaders had initially hoped to vote on legislation to roll back Obamacare before a recess last week, but postponed the planned vote once it became clear the bill did not have enough support for passage.

Prospects for passage are still uncertain, despite efforts to modify the legislation to bring aboard recalcitrant conservatives and moderates.

If Senate Republicans fall short of approving the healthcare overhaul it would call into question not only Trump's ability to get other key parts of his agenda, including tax cuts and an increase in infrastructure spending, through Congress, but the Republican Party's capacity to govern effectively.