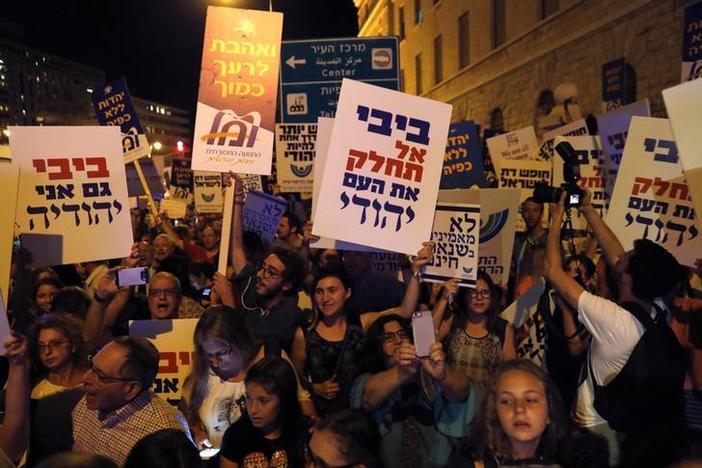 Protesters demonstrate against Benjamin Netanyahu's decision to go back on an agreement giving secular Jews equal prayer space to Orthodox worshipers at Jerusalem's Western Wall. Their placards, using the nickname for the Israeli prime minister, carried messages like 'Bibi, do not divide the Jewish People' and 'Bibi, I'm also a Jew.' July 1, 2017. Ronen Zvulun 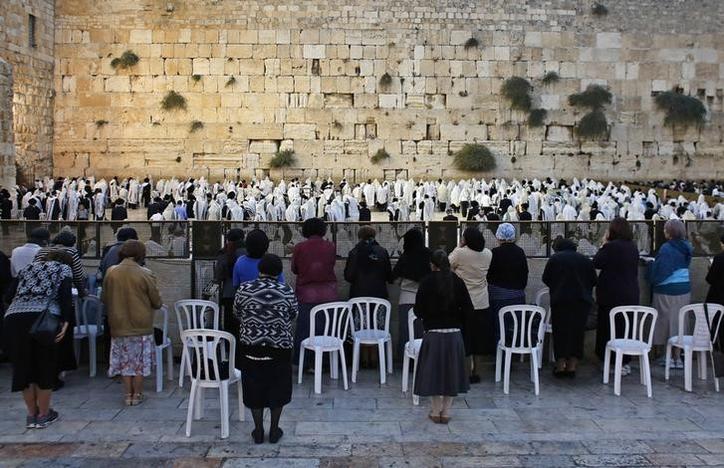 Female Jewish worshippers pray in front of the men's section at the Western Wall. Ammar Awad

Benjamin Netanyahu has miscalculated. In the nine days since the Israeli prime minister reneged on a decision that would have allowed men and women to pray together at Jerusalem’s holy Western Wall, the outrage among American Jews is only getting worse.

The carefully-crafted agreement, adopted by Netanyahu’s cabinet in January 2016 with input from Israeli and American leaders of the Reform and Conservative Jewish movements, would have created a third area at the Wall where both men and women could pray together. In spiking the deal, and thereby keeping the genders separated, with the lion’s share of the wall reserved for men, Netanyahu has caved to pressure from the increasingly strident ultra-Orthodox partners in his governing coalition. But the prime minister’s pandering to minority hardliners has caused an unprecedented uproar among the Diaspora Jews whose political and financial support is crucial to Israel.

“Enough is enough,” wrote Isaac Fisher, a board member of the American Israel Public Affairs Committee (AIPAC), in a pained letter to senior Israeli officials. “The time has come for the Israeli government to understand that its public includes all the people of Israel.”

Fisher, a real estate magnate and philanthropist, has asked for the return of the $1 million he invested in Israeli bonds last month and announced that he is suspending fundraising activities for Israel over what he described as Netanyahu’s “serious act of contempt” for the rabbis and leaders of U.S. communities. “Netanyahu and the ultra-Orthodox say, ‘You don’t matter. They say to our women, ‘Your Judaism isn’t Judaism’,” Fisher told the newspaper Yediot Ahronot. “We have an obligation to put an end to it.”

Jewish Canadian Charles Bronfman, a billionaire and major donor to North American Jewish causes, wrote to Netanyahu that he did not know of any other country that “denies any Jew based on denomination.” AIPAC, a powerful pro-Israel lobbying group, was so concerned that it sent an emergency delegation to meet with Netanyahu over the Fourth of July weekend.

At present, the Wall, once part of the ancient temple of Jerusalem, divides men from women75 percent of the space and access to more than 100 Torah scrolls reserved exclusively for men. The remaining quarter, with no scrolls, is assigned to women. Non-Orthodox Jews do not separate men and women for prayer in synagogue, but they are not allowed to pray together at the Wall except in a third section, below ground level, that is not fully excavated and invisible from the main plaza. The agreement would have given them equal space for their prayers – a principle supported by nearly two-thirds of Israelis.

Friction over how women pray at the Wall, known in Hebrew as the Kotel, has been increasing for years. In 2013, Israel police detained 10 women from Women of the Wall, a group that has been protesting gender restrictions since 1988, for praying out loud and wearing prayer shawls traditionally used by men.

The current crisis, however, takes place against a backdrop of growing ultra-Orthodox extremism and the secular majority’s dwindling patience for their demands. Orthodox political parties are incensed about a conscription law drafting young ultra-Orthodox men as part of Israel’s mandatory military service; secular Israelis resent the preferential tax treatment and state sponsorship of religious institutions that the ultra-Orthodox enjoy.

Orthodox political leaders have recently adopted more confrontational rhetoric. On July 3 Shas leader Aryeh Dery, one of the ministers who forced Netanyahu’s hand, absurdly claimed the Reform movement intends to convert thousands of African asylum-seekers (he called them “infiltrators”) to Judaism, so they could become Israeli citizens. The next day, the baseless xenophobic claim was parroted by Minister of Education Naftali Bennett, who heads the Jewish Home party.

The Israeli public is alert to the consequences of Netanyahu’s rebuff of their international supporters. The hosts of Vilensky and Bardugo, a popular afternoon drive-time radio news show, said the prime minister’s “surrender to the ultra-Orthodox… signifies a loss of Israel’s number one strategic interest, American Jews.”

A July 4th editorial in Haaretz noted the key political role played by U.S. Jews: “They push Israeli causes in the White House, lobby for budgets on Capitol Hill … defend Israel’s good name in the media, fight our wars, lock horns with our enemies and stand by our side even when they don’t agree with it.”

“Netanyahu, his party and anyone in his coalition must become toxic,” Gordis, an American-born Orthodox Jew who lives in Israel writes. “No meetings with American Jews, not in Israel and not in the U.S. Delegations that would normally meet with him should stop. Israel’s consuls-general in the US should be shunned and disinvited.”

Netanyahu seems impervious to the scale of the rage he has precipitated. After heaping praise on President Trump at the United States embassy’s Fourth of July party, he said, "I am committed to making every Jew feel at home in Israel, including at the Kotel. All we need is patience and perseverance." He offered no details as to how he would reconcile the tension between keeping his coalition partners happy without alienating his mainstream supporters.

About the Author Noga Tarnopolsky has covered the Israeli-Palestinian conflict and US-Israeli relations for more than twenty years. Her work has been published in publications that include the New York Times, the New Yorker, and the Washington Post. @NTarnopolsky