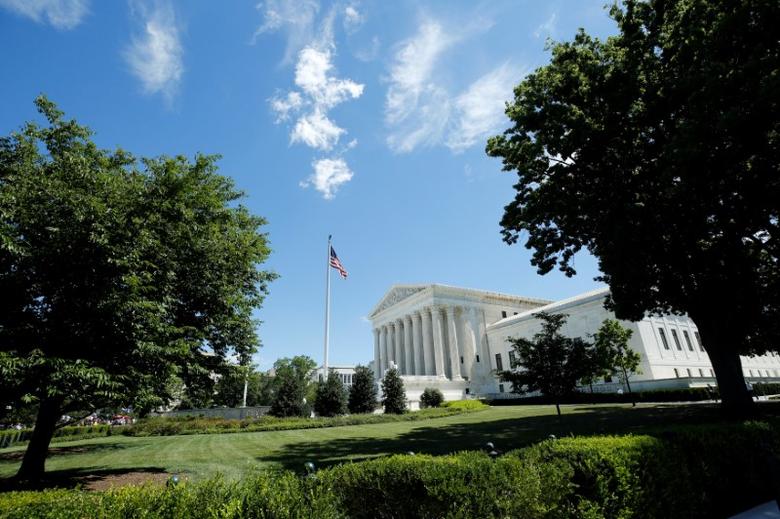 The building of the U.S. Supreme Court is seen after it granted parts of the Trump administration's emergency request to put his travel ban into effect immediately while the legal battle continues, in Washington, U.S., June 26, 2017. Yuri Gripas

The U.S. Supreme Court on Friday let Wisconsin officials continue to enforce a law allowing them to detain pregnant women suspected of abusing drugs or alcohol while the state appeals a lower court ruling that struck down the law.

In its brief order, the Supreme Court did not give any reasons for lifting an injunction against the so-called "cocaine mom" law imposed last April by a federal judge in Madison, Wisconsin, who said it was unconstitutionally vague.

Justices Ruth Bader Ginsburg and Sonia Sotomayor said they would have kept the injunction in place.

Wisconsin Attorney General Brad Schimel said the decision was "a victory for the rule of law and restores important tools that make mothers and children safer and stronger."

Wisconsin's Unborn Child Protection Act, enacted in 1998, gives courts power over any expectant mother who "habitually lacks self-control" over drugs or alcohol, placing an unborn child at risk. The law allows officials to hold the pregnant woman in custody if she refuses treatment.

Former Wisconsin resident Tamara Loertscher sued state officials in 2014 after a hospital in Eau Claire, Wisconsin reported her for testing positive for after methamphetamines and marijuana while she was three months pregnant.

She said she had stopped using the drugs, but a juvenile court judge jailed her for 18 days until she agreed to be assessed by a drug treatment facility.

She submitted to weekly drug testing and gave birth to a healthy baby boy in 2015, according to court papers.

An attorney for Loertscher, Jeff Bowen, said in an email he was disappointed with Friday's decision to keep the law in place, noting the lower court ruling was based on "extensive evidence."

Loertscher claimed the law's terms were ambiguous, in violation of the U.S. Constitution's guarantee of due process under the law. She was supported by the American College of Obstetricians and Gynecologists and the American Public Health Association, which said that the law's coercive measures actually deter women who use drugs from accessing prenatal care.

The state appealed, and last month, the U.S. Court of Appeals for the 7th Circuit in Chicago refused to lift the injunction while it reviews the case.

The state then turned to the Supreme Court, arguing that the injunction threatens the health and lives of unborn children.