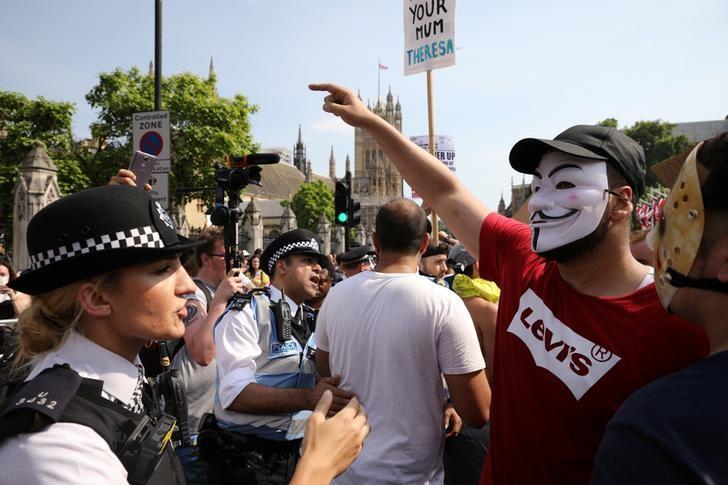 The BBC news at 7:00 this past Tuesday morning had eight stories - each redolent of the despair which grips British public life.

An opener was the global threat posed by the successful test of a North Korean ballistic missile and the U.S. response that “war cannot be ruled out.”

Having mooted a global nuclear Armageddon, the bulletin plunged into British national miseries: the results of an investigation, which, said the BBC reporter,  “could scarcely be much worse,” into  police failure to assist victims of harassment; another indictment of police by the survivors of the Grenfell Tower fire for not arresting any of those deemed responsible for the inferno; an expected collapse of the government’s determination to restrict public sector pay rises to 1 percent; yet another alleged police failure, this time to protect Bijan Ebrahimi, an Iranian refugee in the UK murdered after years of racist abuse; the charge that a government report on Saudi sponsorship of terrorism in the UK had been suppressed; news that most students leave university with debts of around 50,000 pounds (about $64,000),which most can never repay.

Sports usually come last in BBC bulletins, and since the UK is quite a sporty country, it’s often cheering. Not on this grim bulletin. Mark Cavendish, one of Britain’s cycling stars, crashed out of the Tour de France. British morale would now seem to depend on Andy Murray winning Wimbledon: a challenge for one whose stellar form has slipped this past year.

Anger is now the default position of public reaction. Sometimes, as in the case of Grenfell Tower, it seems justified since the (preliminary) evidence is that the Kensington and Chelsea Council skimped on the quality of the building’s insulation and fire doors. But blaming the police for not yet making arrests in a case which is complex as well as tragic, or pouring vocal contempt, at another meeting, on the judge charged with heading an inquiry into the causes of the fire before he has begun his work, it isn’t.

That the normally-trusted police and judiciary now often bear the brunt of the anger points to a fear which lies beneath the anger. It’s a fear compounded of a deep uncertainty which has settled on British society, a fear that there are vast problems in the world, but they are unsolvable.

These are issues which actually do have solutions, but they checkmate each other. The police could cut corners and charge officials for negligence or worse in the Grenfell Tower fire that took 79 lives - and lose the cases for lack of evidence. Or they could proceed with care, and be branded as negligent themselves by an aroused public and vote-seeking politicians.

The overhanging problems in Britain are Brexit and the rancid politics of blame following last month’s general election. Brexit is a torturous amalgam of vast changes to the treaties which have governed the UK’s legal, political and economic frameworks for over 40 years; domestic politics are spiced with jostling for power within the ruling Conservative Party, whose leader, Theresa May, is gravely weakened by nearly losing an election she should have won in a landslide.

The leaders and officials in Britain’s public service and crucial national institutions overwhelmingly believe that Brexit is a disastrous course. The Bank of England, headed by Canadian economist Mark Carney, loyally follows the government’s line, but is privately concerned that the City of London will lose many of its key institutions and that the economy will decline, when Brexit finally happens

The deepening nervousness of the country could be stanched - at least to a degree - if the government had an opposition that respected the desire of the majority for the Westminster parliament to be sovereign once more. But that isn’t the case.

The far-left Labour leader Jeremy Corbyn, defying conventional wisdom that he would crash and burn the party in the June election, instead increased Labour’s vote by adopting a position of pure populism that seemed to appeal to the middle class, young and old. A manifesto whose figures did not add up, a position on Brexit so vague as to be unclassifiable, and a steady charge that the Conservatives were the same old reactionary morons they had always been,  helped Labour outperform expectations and solidified Corbyn’s leadership - and another setback to British society.

Britain is presently no country for great leaders. Among the likely contenders to replace May, only Chancellor of the Exchequer Philip Hammond shows an understanding of the size of the task before his government and the depth of the abyss which might face an indebted Britain. Hammond, however, is a low-key technocrat who has yet to show he has the stomach for a political fight. As if to cement the woes of the past week, already-low productivity fell by 0.5 percent.

Britain is checkmated. It is one country hoping for the best against 27 EU members that have set an agenda which excludes the UK from the club it has spurned. The EU will deny the UK access to the single market which takes the bulk of its exports.

But if the British government softens its stance and follows the Norwegian route of being out of the EU while still in the single market -and thus open to immigration from the EU member states -it will face a fierce revolt from the Brexiteers. Its only big friend in the world then would be the United States, with a president whose aversion to free trade is one of his few fixed ideas, and who may face a future weakening of his own power to the point where he could not help much, even if he wished to.

For the first time since the 1970s, when Britain was branded the sick man of Europe, the country faces a set of serious, potential crises which it will take great statesmanship to avoid. It does not, at present, appear to have anyone, or any party, which possesses it.

(John Lloyd co-founded the Reuters Institute for the Study of Journalism at the University of Oxford, where he is senior research fellow. Lloyd has written several books, including “What the Media Are Doing to Our Politics” and "Journalism in an Age of Terror". He is also a contributing editor at the Financial Times and the founder of FT Magazine.)