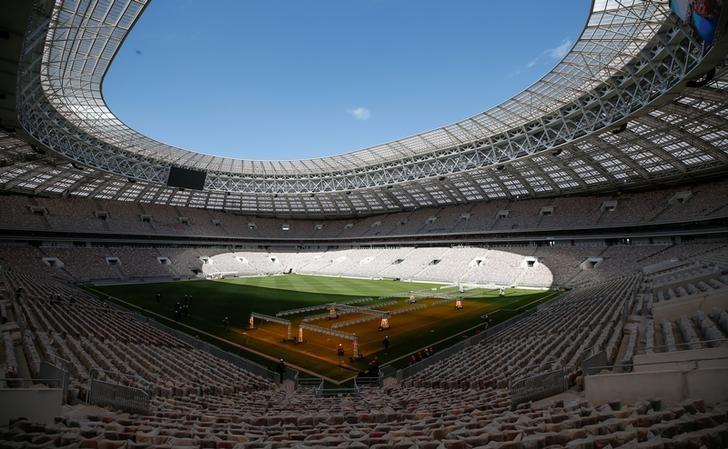 An interior view shows the Luzhniki Stadium, which will host 2018 FIFA World Cup matches, in Moscow, Russia May 6, 2017. Maxim Shemetov

A packed crowd watches two teams battle it in a World Cup match on a rainy evening at London's Wembley stadium. Yet the action is really happening on a balmy night in Marrakech.

It sounds like science fiction yet sports marketing guru Patrick Nally says that, with technology advancing, it will soon be reality.

Nally, widely credited with creating the global cash cow the sport has become, says that soccer's governing body FIFA needs to react and radically alter what he says is as an outdated World Cup hosting model.

The World Cup has always been hosted in a single country over a month-long period, except in 2002 when it was shared between Japan and South Korea.

Hundreds of thousands of fans flock to the host nation, turning it into a logistical nightmare, although more watch matches on huge open air screens at so-called "fan fests" than in the stadiums themselves.

Like many critics, Nally says the bidding process is open to horse-trading - as laid bare by the so-called Garcia report published by FIFA last week into race to host the 2018 and 2022 tournaments, won by Russia and Qatar respectively.

Nally said that, despite changes to the bidding process which will now allow FIFA's 211-member Congress to choose the hosts rather than the executive committee, the system was still far from perfect.

"One assumes that national federations who will bid in the future will be looking at all sorts of ways to influence the outcome," he said. "I don't think the culture could be changed overnight."

"Who's World Cup is this? It's the fans' World Cup, it's not FIFA's World Cup," he added. "Technology allows the event to be staged very differently way, in a far less politically manipulated way."

Nally said the key would be new technology which would allow holographic images of matches to be beamed into stadiums around the world.

"If I am in Wembley, I will be looking at the Wembley pitch and I will be seeing live what is going on at a pitch somewhere else in the world," he said. "Technology reproduces it in such a way, you would not know that it's not before your very eyes."

"You can show every game in stadiums in every one of FIFA's 211 member nations. You don't necessarily need to put the World Cup all in one country."

Nally, who brokered FIFA's first major sponsorship deal -- with Coca Cola -- ahead of the 1978 World Cup, worked as a consultant on Japan's bid to host the 2022 World Cup which included a proposal to broadcast holographic images of matches live to 400 stadiums around the world.

He now believes matches can be played around the globe, provided they are co-ordinated so that teams did not have to travel thousands of kilometers across time zones between games.

His proposal is similar to Euro 2020 which will be played in 13 cities across the continent although European soccer's governing body UEFA has said it will be a one-off.

"(Euro 2020) is going to be an interesting experiment because," said Nally, who has long since disassociated himself from FIFA. "It's a small step in the direction I'm proposing"

Nally said he would like fans and players to be given a say in choosing hosts cities - though he admitted it was a long shot.

"It would be nice to think they could but I don't know the structure that would allow them to do this," he said. "The only way it could be done is through national associations -- and they don't necessarily listen to their fans."