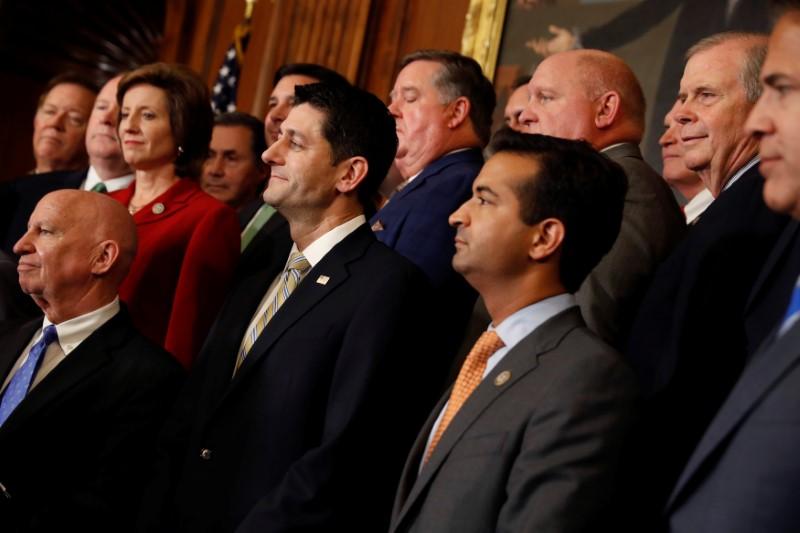 Rep. Kevin Brady (R-TX), Speaker of the House Paul Ryan and Rep. Carlos Curbelo (R-FL) look on during a news conference announcing the passage of the "Tax Cuts and Jobs Act" at the U.S. Capitol in Washington, U.S., November 16, 2017. Aaron P. Bernstein

A Republican lawmaker in the U.S. House of Representatives unveiled a bill calling for a carbon tax on Monday, saying he hoped the legislation would at the very least renew a U.S. debate on climate change that has languished for a decade.

Representative Carlos Curbelo, a member of the House tax committee who faces a tough re-election bid in Florida, said the legislation, called the "Market Choice Act," enjoys small but growing support among Republicans, who in recent years have been better known for knee-jerk rejection of carbon tax proposals.

The measure is sure to fail. But Curbelo, speaking at a Washington forum on Monday, remained upbeat.

"I truly believe that one day this bill, or legislation similar to it, will become law," Curbelo said.

"It will spark an important debate about investing in our country's infrastructure, the way we tax and what to do to protect the environment," he said.

Curbelo said his legislation would exceed the carbon reduction goals of the Paris climate change pact by imposing a $24-per-ton levy on industrial carbon-dioxide emissions, which would begin in 2020 and rise annually. It would replace existing taxes on gasoline and aviation fuel.

He said the tax would generate $700 billion in revenue over a decade for infrastructure investments. The bill would also impose a moratorium on U.S. regulations governing greenhouse gas emissions.

The legislation represents a small but meaningful shift for Republicans on climate politics, driven in part by candidates in swing states where increasingly frequent hurricanes and floods make no distinction between Republicans and Democrats.

Many Republicans supported a climate bill 10 years ago. But it died in the Senate. Since then, Republicans, including President Donald Trump, have largely stood firm on two positions: cutting taxes and opposing climate legislation.

Last week, the Republican-controlled House voted 229-180 to approve a resolution expressing "the sense of Congress that a carbon tax would be detrimental to the United States economy."

Curbelo opposed the measure, along with five other Republicans. A seventh chose not to support the resolution by voting "present." Curbelo intends to discuss his bill with the 86-member bipartisan House Climate Solutions caucus, which includes 42 other Republicans.

"We're seeing trends in the House that should give us hope," said Curbelo. The bill would be introduced formally later on Monday.