An anti-Brexit protester waves an EU flag opposite the Houses of Parliament in London, Britain June 8, 2018. Simon Dawson 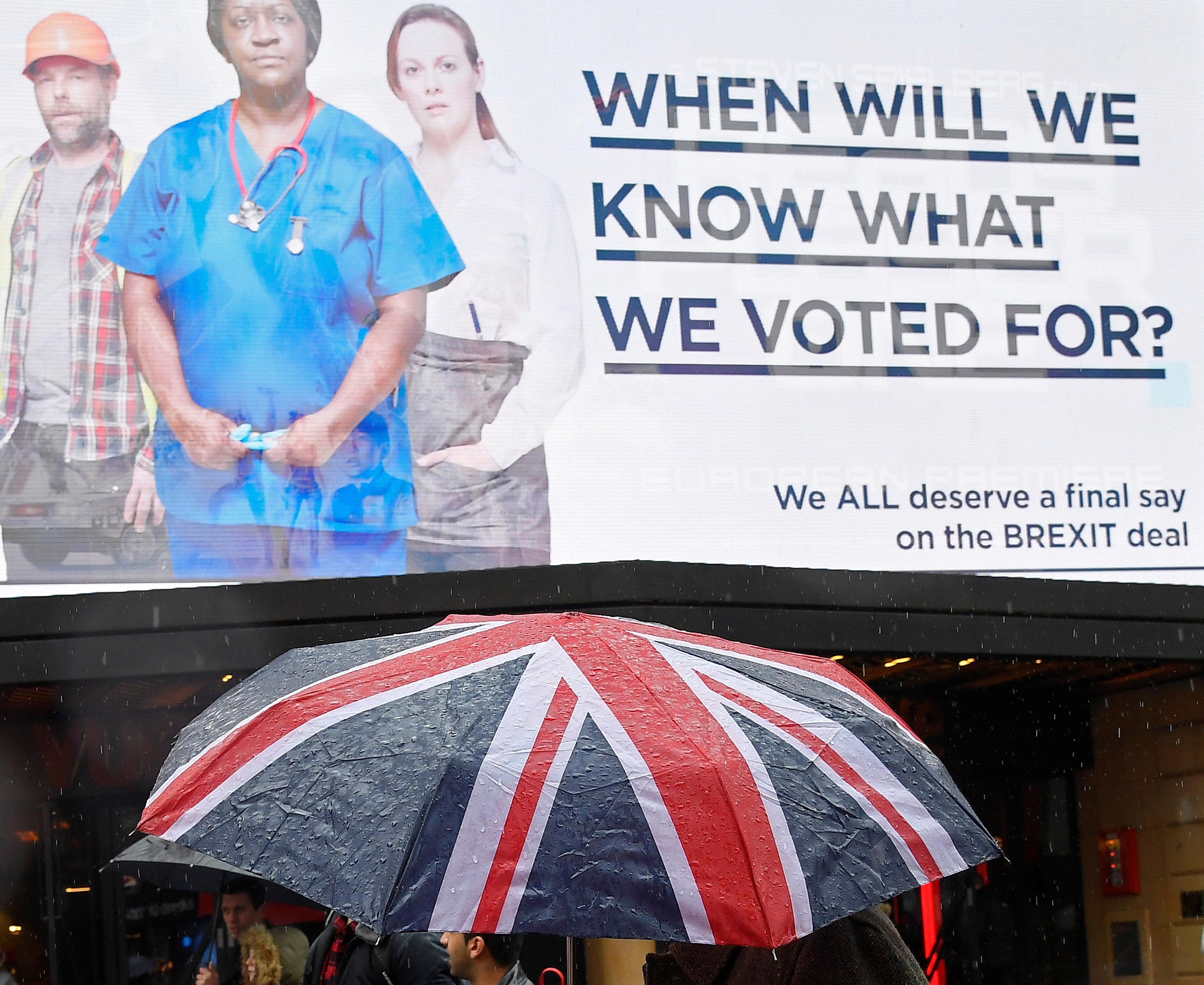 A pedestrian shields himself with a British union flag umbrella as he passes a billboard with a Brexit related campaign slogan in Leicester Square, London, Britain, March 29, 2018. Toby Melville

In scarcely more than six months Britain will leave the European Union. That departure on March 29, 2019 could be toxic and disruptive through a failure to reach a deal, hurting Britain most of all, but the EU as well. Or there could be an amicable parting of the ways. For this to happen European leaders meeting in Salzburg this week must now give some ground as the negotiations enter their final stage.

Up till now the EU’s strategy has been to secure the union from copycat national revolts in other member states by taking a tough line with Britain. European leaders have closed ranks round the indivisibility of the four freedoms – in goods, services, capital and people. The EU has shunned an à-la-carte negotiation. Instead Michel Barnier, its chief negotiator, has responded to Britain’s original “red lines” such as regulatory autonomy with a menu of unpalatable options. These range from a Norway-style hug that would leave the British government a passive rule-taker, to a Canada-style trade deal far removed from Britain’s current intertwined relationship with the EU.

The EU’s stern line has paid off, not only because of the disparity between the remaining union of 446 million people and a country of 66 million, but also owing to the March 2019 deadline, which leverages that advantage further. The Article 50 procedure in the Lisbon treaty, which Britain triggered 18 months ago, was designed to deter exit rather than to facilitate it. In particular, a country leaves within at most two years with or without an orderly withdrawal agreement; any extension requires unanimity among the 27 remaining countries.

As a result, the negotiations that Brexiters thought would be such a doddle have proved to be a series of harsh lessons. Far from gaining financially from leaving the EU, Britain must pay an exit bill of close to 40 billion pounds ($52 billion). As the folly of triggering Article 50 in March 2017 without a coherent and deliverable strategy became clear, Britain hastily had to secure a transition arrangement that in effect postpones Brexit – though not its exclusion from power within the EU – until the end of 2020.

The biggest climbdown of all has been the Chequers plan of July, when Prime Minister Theresa May strong-armed her Cabinet into backing a softer Brexit. Out went the original plan for a hard Brexit through an enhanced Canada-style free-trade agreement. Instead, May sought to retain as close as possible a relationship in the trading of goods, including a common rulebook and what amounted to a customs union. Just how big a swerve in government policy this represented became clear when leading Brexiters David Davis and Boris Johnson quit in protest as ministers, the latter claiming that “we appear to be heading for a semi-Brexit.”

European leaders meeting in Salzburg on Sept. 19 and 20 must now make a crucial choice. They can persist with their hard line, insisting on the indivisibility of the single market and thus rejecting a special deal for Britain in goods. Or they can concede some ground by moving at least some of the way towards the Chequers plan.

Given the success of their strategy to date, European leaders look likely to stand firm. If Britain suffers as a result, this will underscore their central message, that leaving the EU is a bad call. What’s more, as the reality of an unattractive deal on Britain’s future relationship sinks in, the British could think again about leaving, perhaps precipitating a second referendum.

But such an unyielding approach would be risky, raising the chances of a Brexit without any deal at all, given the current divisions within the ruling Conservative party and potential deadlock in parliament. Most obviously, it would weaken May and embolden Johnson as he maneuvers to replace her as prime minister. In any case the outcome of a second referendum is far from clear, since voters are as likely to blame the EU as the British government for a poor deal.

It makes sense for the EU to behave now with magnanimity because even before Britain formally leaves, it is abundantly clear that the referendum vote in 2016 has been a mistake. The economy has already suffered, slipping down the growth rankings among the G7. A country once respected for its pragmatism and political stability has lost the plot. Britain’s abject experience is already an object lesson to other countries not to follow suit. Indeed there has been an upsurge in optimism among Europeans about the EU’s future over the past two years.

That is why the EU should offer some support for embattled May. The supposed indivisibility of the four freedoms is more theological – the union’s version of the holy trinity – than substantive. The deal that May is seeking is quite similar to that of Switzerland, which is essentially in the single market for goods but not services. Though her convoluted proposal for a customs union in all but name is unworkable, the EU could nonetheless offer the real thing. Engaging with May on her vision for the future trading relationship would pave the way to resolving the most fraught part of the withdrawal agreement, on how to avoid a hard Irish land border.

In making their choice European leaders should heed history. As they meet in Salzburg they could ponder the fate of an earlier sprawling multinational enterprise, the Austro-Hungarian empire, which disintegrated a hundred years ago at the end of World War One. Its common bonds of a customs and currency union together with a single military and foreign policy (a stretch too far for the EU) were not enough to contain breakaway national movements. As worries about migration have revived nationalist sentiments, the EU must avoid rigidity.

The EU may hold the high cards, but it does not have to play them all to demonstrate just how painful it can make Brexit. The union has a strong interest in a workable overall relationship with Britain after it leaves – not least in security, which forms an important part of the Chequers plan. The best way to achieve such a constructive partnership is for the EU to compromise now rather than sticking to an unrelenting stance.