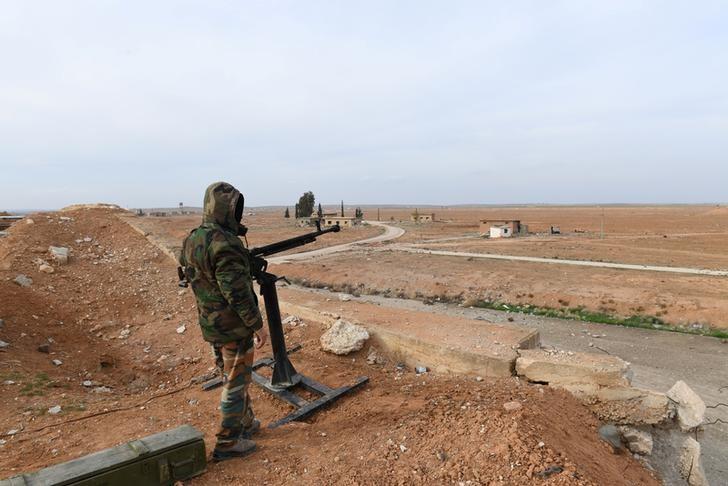 A Syrian Army soldier loyal to Syria's President Bashar al-Assad forces stands next to a military weapon in Idlib, Syria January 21, 2018. SANA/Handout via 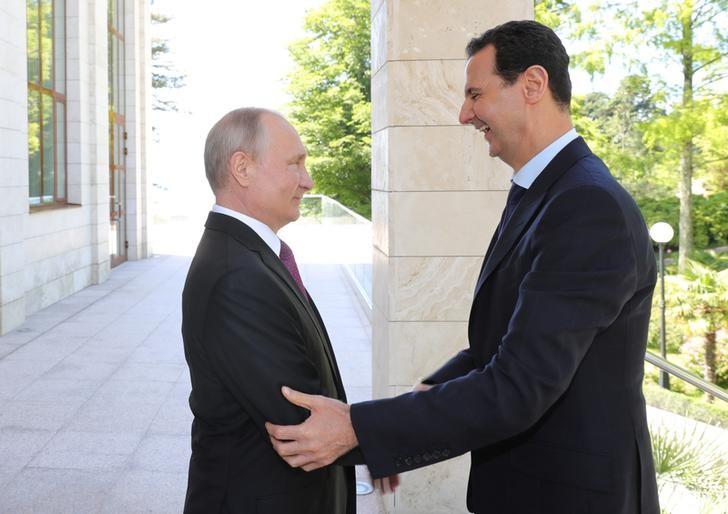 By David A. Andelman

The war in Syria seems to be entering its final days, as President Bashar al-Assad’s government forces close in on one of the country’s last opposition-led provinces. And U.S. President Donald Trump, focused on trade wars across three continents and political wars at home, still doesn’t seem to have figured out what role the United States should be playing in the conflict or its aftermath.

Yet the stakes are horrifically high – for the United States and many of its regional allies. Sometime very soon, as the noose tightens and then closes around Idlib, the last rebel-held enclave in Syria, Trump will have to make some critical choices. He will need to decide where the United States casts its lot, and how it forces an end game that constrains the more malevolent outside players – especially Iran and Russia – while supporting forces of democracy before they are finally snuffed out.

Throughout this seven-year war, Assad has played a methodical and deadly game. Especially since the arrival of major Russian military aid nearly three years ago, Assad’s forces have moved across the nation, seizing villages, cities and provinces, often slaughtering rebel forces and militants that held each area – making little distinction among any of them. Now he has driven what remains of his opponents into Idlib, a small enclave in northwestern Syria that borders Turkey.

It is there, in Idlib, that Assad’s foes are preparing for the war’s last gasp. In recent months, a vast number of Syrians have fled to Idlib, which has so far managed to escape control by Assad and his forces. The United Nations estimates that more than three million people are living there, more than twice the pre-war level.

In a possible prelude to a government offensive, government planes have blanketed the area with leaflets proclaiming: “Your cooperation with the Syrian Arab Army will get rid of the armed terrorists among you and will keep you and your families safe.” Few believe this claim, as government bombing has been largely indiscriminate throughout the conflict, killing civilians as freely as military. Not even schools or hospitals have been spared.

Throughout the last two years, and especially in recent weeks, however, the American role in the conflict has been limited, while the peril to neighboring countries has been growing exponentially. In 2011, President Barack Obama and some European leaders called for Assad to step down, then largely stood back as his government’s forces reclaimed territory and power, with support from Iran and Russia. Over the next seven years, Assad’s troops, backed by unrelenting bombing and ground assaults by Russian air power and Iranian elements, pushed both rebels and Islamic State militants into increasingly narrow enclaves while driving millions into exile abroad.

Three years ago, the Obama administration installed 50 American advisers in the country, working largely with Kurdish forces the United States had been backing while it tried to figure out which rebel elements were real anti-Assad fighters, and which were simply repurposed members of Islamic State. Since then, the 50-person U.S. force has mushroomed to roughly 2,000 troops. In April 2017 Trump authorized military strikes against Syria after a chemical attack, attributed to Assad’s regime, killed dozens of people.

The fundamental problem, however, is that the United States still does not seem to have any sense of just what a post-conflict Syria might look like. Trump wants American friends in the region to bear the brunt of Syria’s reconstruction – further abdicating any American influence and helping to elevate Russia as the principal outside force.

Case in point: U.S. Secretary of State Mike Pompeo managed to jawbone many of Syria’s neighbors into contributing $300 million to “stabilization” or reconstruction efforts in Syria. Yet on August 17, Trump canceled a $230 million civilian aid program that could have helped rebuild rebel-held areas that Assad and the Russians had destroyed. At the same time, Britain has cut funding for some aid programs in the shrinking, rebel-held parts of the country.

Disengagement from the United States and its allies only leaves Assad more deeply entrenched in power and more likely to accept Russia as its principal backer. It also helps pave the way for Russia, Turkey and Iran to develop influence in the region in ways that may not be aligned with U.S. interests.

Indeed, on Monday Tehran said it had reached an agreement with Syria to remain in the country, as it has since 2013, despite ongoing efforts by the United States and others seeking to contain Iranian expansion in the region. Iranian Defense Minister Amir Hatami and his Syrian counterpart signed the agreement, which expanded the multi-billion investment Iran has already in made in Syria, in front of a beaming photograph of Assad.

Turkey, which has backed some rebel groups seeking to overthrow Assad, has since late 2016 been working with Russia and Iran to bring peace to the region. None of the three countries are aligned with Western interests. Each, for its own reason, wants to keep Assad in power and remove any challenge to his autocratic rule, while providing a base for their unchallenged expansion in the region or, in the case of Turkey, for its war against the Kurds.

The stakes are too high to allow such a denouement. A newly empowered Russia planted firmly in Syria – a nation whose borders include Iraq, Lebanon, Turkey and Israel – is dangerous as it allows the Kremlin a major air and naval facility that dominates the eastern Mediterranean. At the same time, at the end of the conflict Islamic State fighters in Syria could scatter and regroup, or metastasize in areas we have only begun to consider – such as Mali, Niger, the Central African Republic or Somalia.

Trump is certainly distracted – no less so in the wake of a conviction and guilty plea within his closest political family. But Syria is one crisis where the president can show real leadership, if he is prepared to work closely with allies and friends in the region and beyond to find a solution to Syria that ends the bloodshed and establishes a firm footing for an eventual return to sanity there.