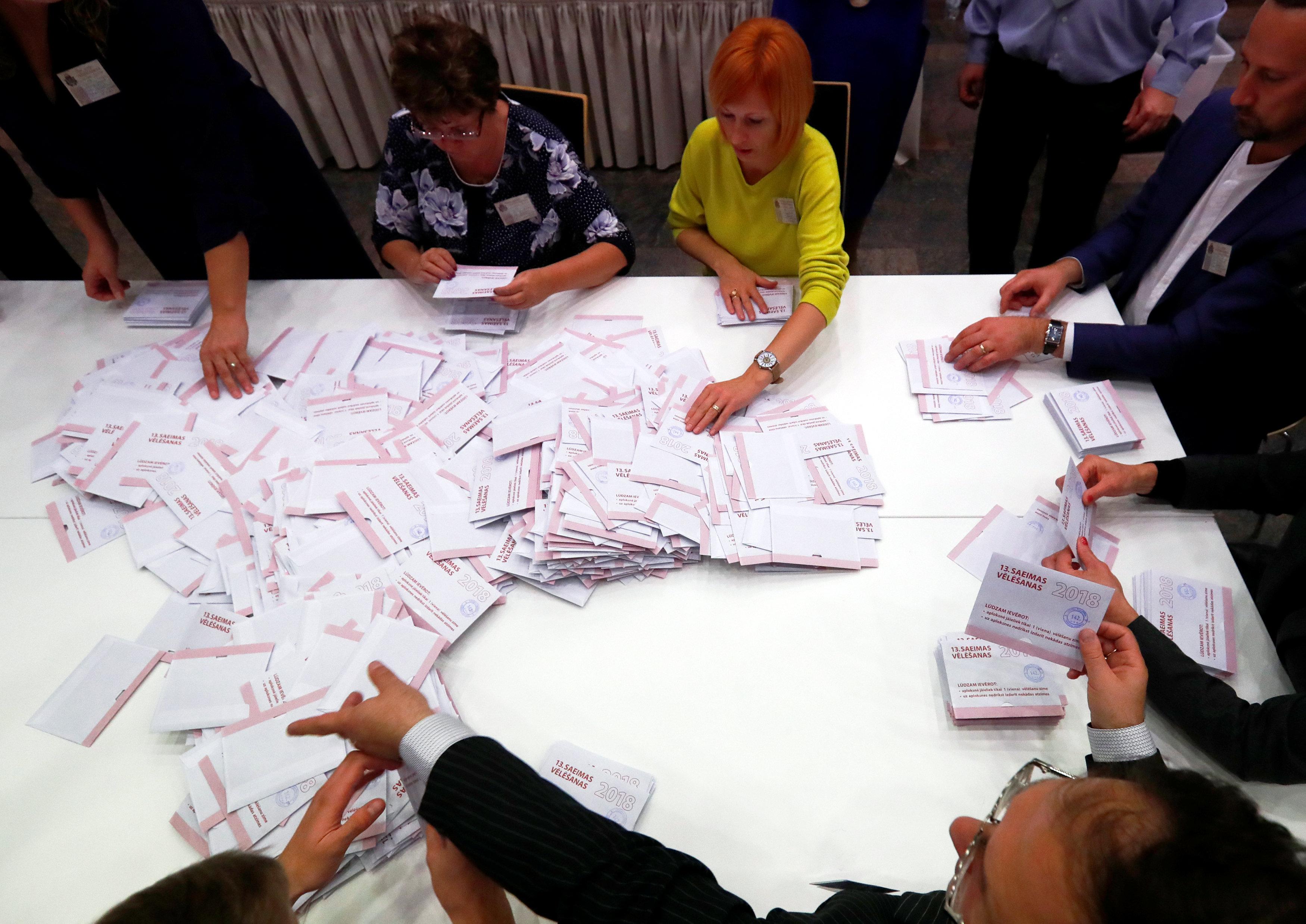 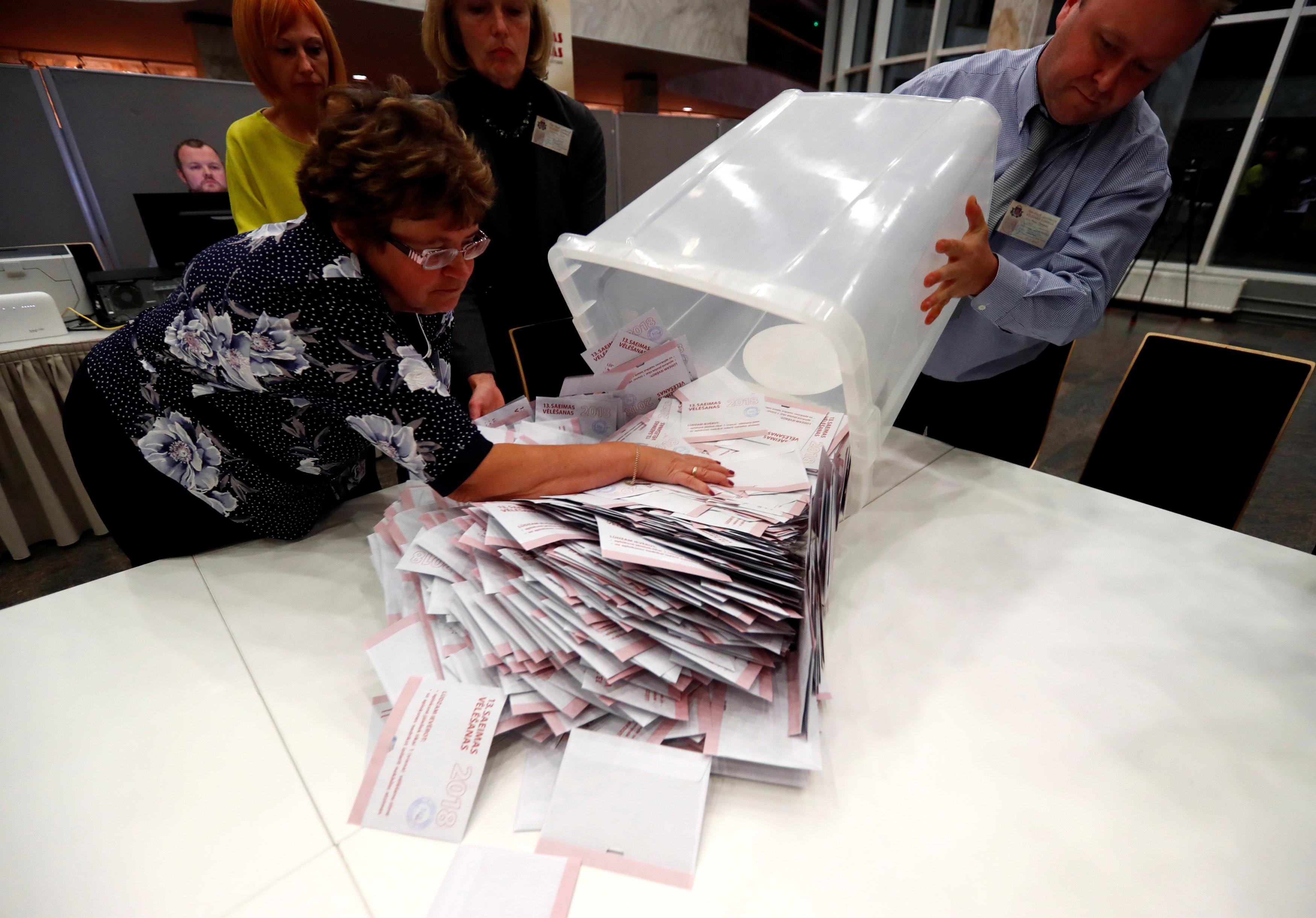 Dissatisfied Latvians rejected the right-of-center ruling coalition in Saturday's parliamentary election but suspicion of the left-leaning pro-Russia party makes it likely the next government will be another formation of ethnic Latvian parties to the right.

The result means a confirmation of the European Union and NATO member's role as a bulwark against Russia in the increasingly hostile relationship between the West and President Vladimir Putin.

Latvians, fed up with corruption and weak democracy in the Baltic country of 2 million, punished the ruling three-party coalition, which lost almost half of its votes, mostly to two newcomers.

The populist KPV LV and anti-corruption New Conservatives won 14.1 and 13.6 percent respectively to become the second- and third-biggest parties.

"Our voters want a change from the old post-Soviet politics which has been very powerful up to now," said Janis Bordans, leader of the New Conservatives. "They want to have a stable Latvia, but a one which doesn't stagnate."

The New Conservatives, whose leadership features several former officers from the country's anti-corruption agency, want to beef up law enforcement and get rid of a number of current officials who they say are corrupt.

Bordans said he would like to be the new prime minister.

"If we count out Harmony then it's logical that we take responsibility. We have to be ready to do it and it is very realistic," he said.

The pro-Russia party Harmony, which is supported by ethnic Russians who make up a quarter of the population, took 19.9 percent of the vote but will find it almost impossible to be part of any government.

The ethnic divide is strong in Latvian politics and other parties have always shut Harmony out of government. It has tried to rebrand itself as a Western-style social democratic party but severed official ties to Putin's United Russia party only last year.

"I don't think this is a norm-breaking election. It carries on the tradition we have seen in Latvia that a quarter of the seats go to the Russian-speaking party," said Daunis Auers, professor of comparative politics at the University of Latvia, adding that other parties would have no problem shutting out Harmony.

"Now they have no reason to form a government with Harmony. They can form a coalition among themselves," he told Reuters.

Before the election, some Latvians were concerned that a strong result for Harmony and the populist KPV could lead to their forming a government and bringing Latvia's foreign policy closer to Putin's Russia.

The result will lead to a more fragmented parliament of seven parties, of which six won between 10 and 20 percent support each. The forming of a government coalition could take months.

Latvia has long been plagued by corruption and moneylaundering. The country's central bank governor is awaiting trial on charges of accepting a bribe and one of the biggest banks, ABLV, went into liquidation this year after U.S. authorities accused it of laundering vast amounts of money for people from the former Soviet Union.

"The message that the voters have tried to send is that we're going to have some new faces in politics," Janis Ikstens, political scientist at Latvia University, told Reuters. "And perhaps they’re not happy with the neglect of social needs."

Harmony will get 24 seats and remain the biggest bloc. It is followed by the New Conservative Party with 16 seats, KPV LV with 15 seats, the National Alliance with 13 seats, Development/For with 13 seats, the Greens and Farmers Union with 11 seats and New Unity with eight seats.