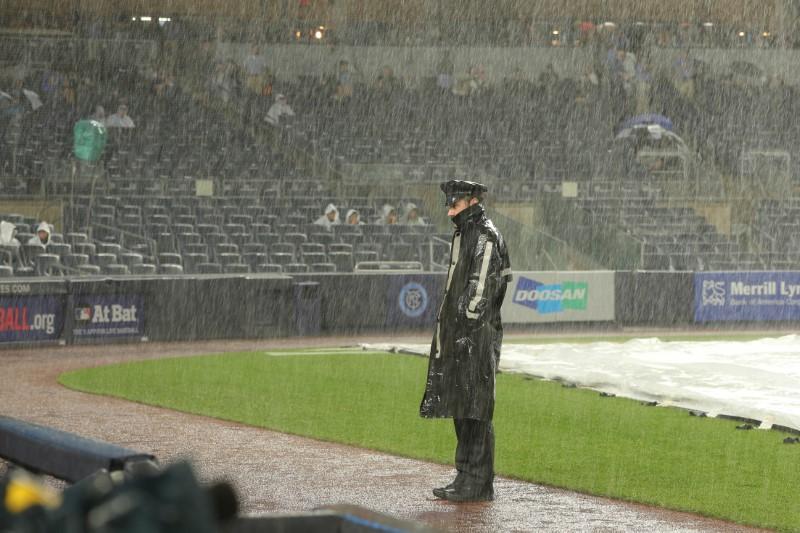 Jul 22, 2018; Bronx, NY, USA; An NYPD officer stands on the field during a rain delay before the game between the New York Yankees and the New York Mets at Yankee Stadium. Mandatory Credit: Brad Penner-USA TODAY Sports

The National Weather Service issued flood warnings and watches from eastern North Carolina to southern New York state, with the region expected to receive 3 to 5 inches of rain on Monday, after areas were soaked with up to 7 inches over the weekend.

The next several days will be quite wet from heavy rain across the region, threatening more flash flooding, said NWS forecaster Sean Ryan.

Hersheypark and its adjoining ZooAmerica attraction in Hershey, Pennsylvania, a city about 100 miles west of Philadelphia, closed Monday due to floods.

"Unfortunately, due to the excessive rainfall over the past three days and localized flooding, Hersheypark and ZooAmerica will be closed Monday, July 23, for the safety of our employees and guests," theme park officials said on Twitter on Monday.

It was not immediately clear when the parks will reopen.

Airports along the East Coast experienced delays of up to two and a half hours due to thunderstorms on Monday, including hubs in New York, Philadelphia and Washington DC, according to the Federal Aviation Administration.

A giant sinkhole opened up in Cumberland County, Pennsylvania on Monday, prompting traffic delays throughout the morning, according to local media reports. Another giant large sinkhole was discovered in Germantown, Maryland on Sunday, Montgomery County Emergency Management officials said on Twitter.